A few months before our anniversary we had been eyeing out the Secret Escape holiday commercials on telly here in the UK.  Within days of signing up on their website, my husband turned to me and said “Do you want to know about this kick @ss trip i just booked, or want me to keep it a secret?!?”  Honestly – he is an amazing holiday planner, and I love the idea of a secret destination, so we left it at that!  It wasn’t until we arrived at Kings Cross station in London to grab the EuroStar that I found out where we were going.  I had no idea what to expect – I am ashamed to admit I hadn’t even heard of this gorgeous town.  It blew my mind!  Brugge has something to offer anyone – indulgent foods, picturesque scenery and plentiful souvenirs.

Markt square is a vibrant center full of cafes, horse drawn carriages and lined with the unique medieval architecture which makes Brugge so irresistible.  It drew us in every time we walked past.  Markt is simply a quintessential European square where you can sense that for centuries people have been gathering here – which today admittedly is mostly filled by tourists, but nevertheless its lure is undeniable.

Every good European city is lined with canals (says the Dane) and Brugge doesn’t cease to impress.  Their narrow canals are hugged by stone building facades tipping into the water and crossed by ancient stone bridges.  The boats need to be fairly low to fit under the bridges, and able to turn on a dime to wind through the meandering waterways.  I can’t imagine a better place to be than strolling alongside, dining in view of or enjoying a float on the water. 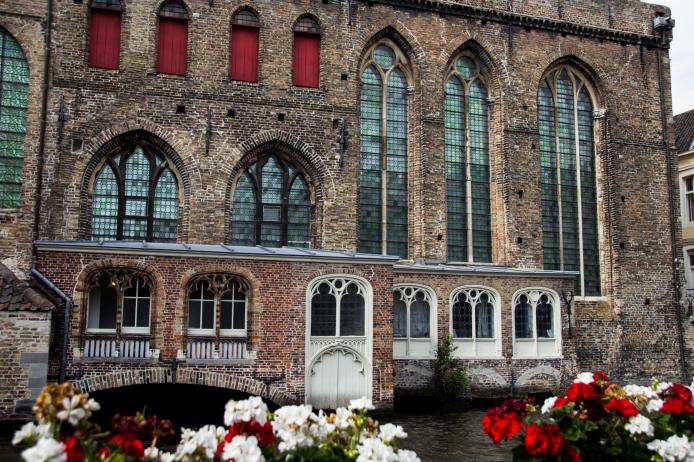 The Memlinc Museum is home to the history of St Johns hospital,

One of the oldest canal bridges in Brugge, thought to be almost 1000 years old

I lied.  There are other things I would rather do in Brugge.  But it’s not the canals fault – everything is irresistible here!  Even just walking around the narrow streets is a charming way to enjoy the city.  Story has it that Brugge was thriving between the 12th and 15th centuries, and had a direct water connection to the seaside port of Damme during this time.  However, that connection started silting after the 15th century and the earlier prosperity fell into decline.  It took over 500 years for the city to recover… until it remade itself as a tourist destination for the British and French.  Luckily for the 2 million yearly visitors, this tourism-inspired renaissance preserved the unique architecture for us to enjoy on our lazy walks.

Stadhuis from the canal 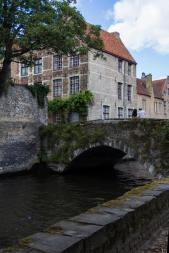 One of the many interesting alleyways 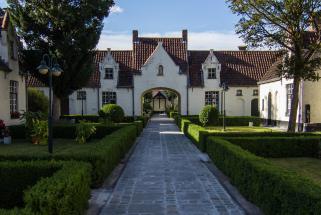 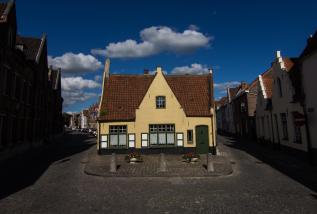 What makes Brugge so great is that there is something for everyone here.  Whatever your indulgence may be – chocolate, waffles, beer, lace, shopping…Brugge has it! We visited the local brewery, De Halve Mann, which is the only active brewery in the center of Brugge and has been owned by the same family for generations.  Though the brewery has adopted modern brewing techniques, they have a great tour where they guide you up through the levels of the building where you learn about the old ways and get to see the old equipment.  Every Belgian beer has its own unique glass which makes drinking it that much enjoyable – and we learned that it is against your better judgement to drink beer from a can or bottle, as you need to let the beer breathe and release CO2 in order to not only enhance the flavour but also reduce the effects of a hangover headache.  One of the best parts of this tour was the amazing view from the rooftop – especially since the sun poked out while we were there!  There is just something magical about European rooftops…. As for the chocolate and waffles, at first we were overwhelmed by which to try first, what’s the best in Brugge?!?  Turns out it was all delicious, though our favourite waffle was on Breidelstraat, the small pedestrian street between Markt and Burg plein, adorned with a Belgium flag. We got our decadent chocolate from the chocolate store next to Basilica of the Holy Blood in Burg plein 🙂 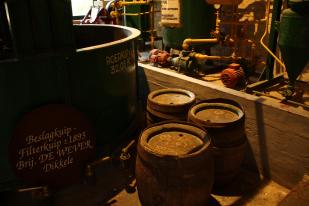 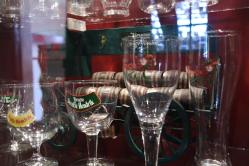 Every beer has its own unique glass 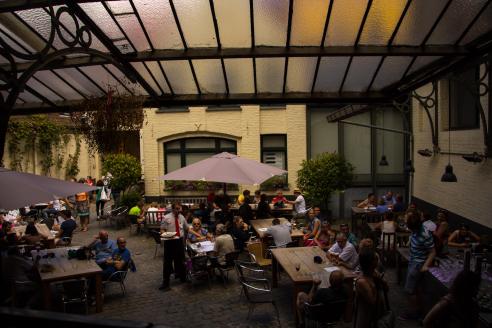 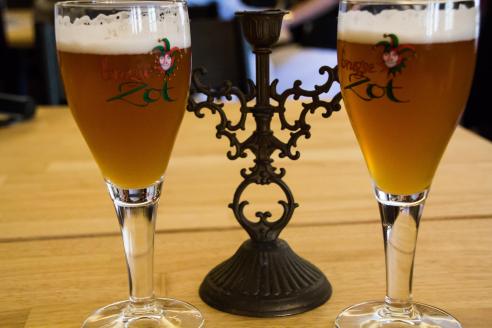 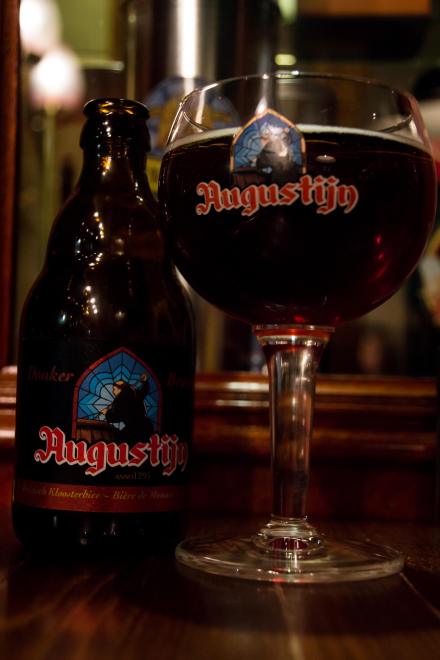 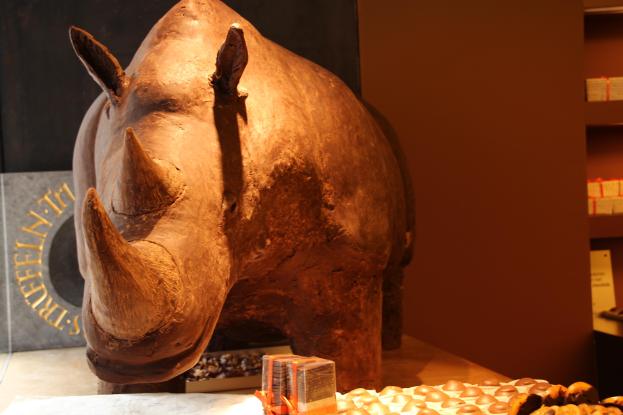 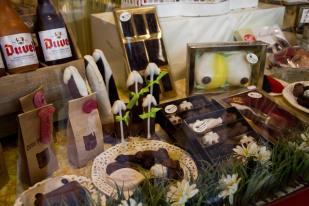 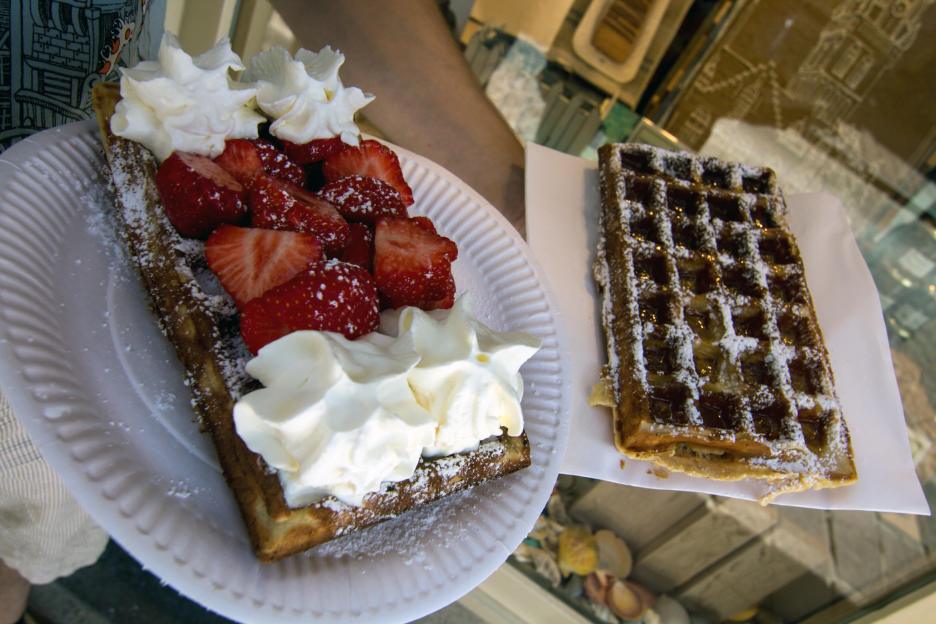 Brugge is the perfect size for a weekend getaway, it is very manageable and you get to recognize the pleins in no time.  We were lucky to be staying near Berg plein, which was vibrant with life that weekend.  Berg was hosting a music festival that weekend with the ancient Stadhuis (city hall) lit up in colored light as magical  backdrop.  During the day we caught the bustling scene and in the evening we enjoyed some Flemish beer and unique music under the stars. 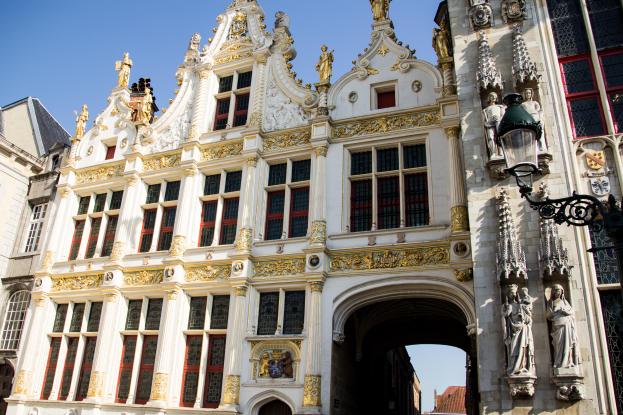 Brugge coat of arms – legend has it the bear lived in the woods before the city was built, and had to be defeated before Brugge could come about 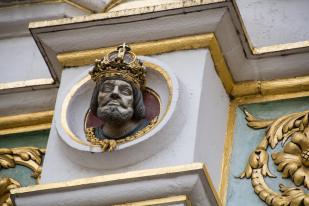 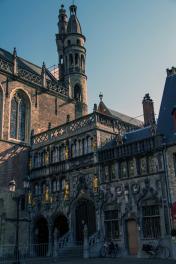 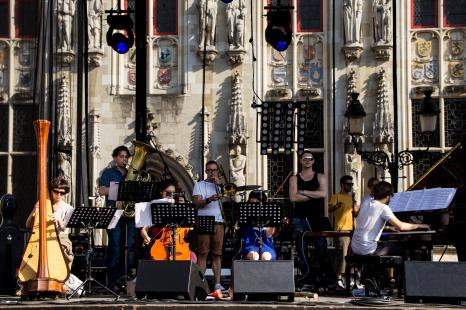 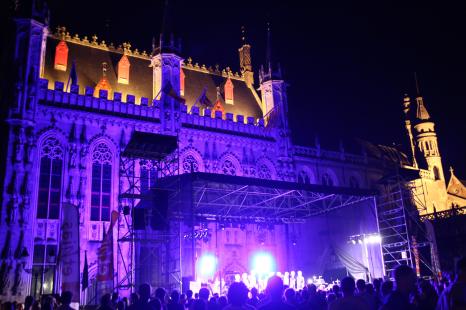 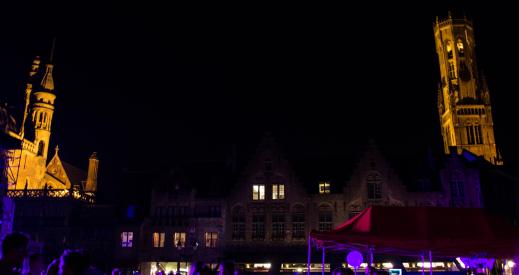 Oh, and in case you were wondering – the “Secret Escape” hotel was amazing!  Hotel Casselbergh made us feel like royalty.

Jan van Eyckplein marks the end of a canal and celebrates the Flemish painter, Jan van Eyck, who was a native of Brugge.  His statue looks not towards the canal, but towards the Poortersloge which In the 15th century this was the assembly point for the burghers, or wealthy citizens, of Brugge and their jousting association ‘De Witte Beer’ (the White Bear). Their emblem, a bear holding the coat of arms of Brugge, still adorns the façade.  This is just another public governmental building in Brugge that fools many tourists into thinking is is a holy building because of the ornate architectural carvings.

A striking feature is the elegant little stair turret, topped with a gilded weather vane representing Saint George and the dragon 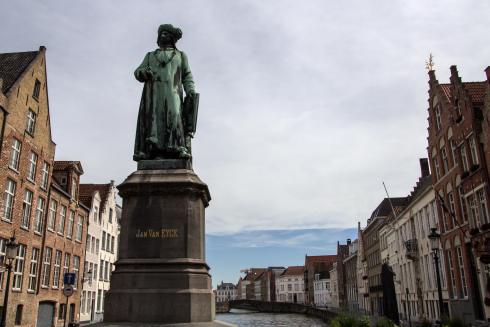 Here are a few magical snaps of Brugge on a warm summers evening.  A perfect place to meander around on an anniversary ❤

Dijver, Brugge has one of the best panoramic views in the whole city.  Framed by towering clock towers and adorned with a romantic willow tree, multiple cafes and bridges span over this atmospheric corner.  We pilfered through the daily antiques market and picked out a unique candelabra for our anniversary gift to ourselves (you might have noticed it up above with the Bruges Zot beer).

Brugge is the perfect weekend getaway with something for everyone!

Fidel, the most famous Bruggian!